Various domains of intangible cultural heritage are represented in the Amsterdam Museum.

We are interested in the changes in oral traditions and language, which we collect in co-operation with the practitioners, the Dutch-speaking inhabitants of the city, for instance through the stories on our interactive website Geheugen van Amsterdam (Memory of Amsterdam) and through oral history interviews and personal testimonies in our exhibitions/museum collection. Some examples:

Collecting, showing and (internationally) comparing social practices/rituals played a major role in our exhibition on Football as the new religion.

We also have a keen eye for new social practices such as the Keti Koti dialogue tables where rituals help to talk about the impact of slavery. The museum together with the practitioners has presented this ritual various times.

We also pay attention the way ICH travels, f.i. the practice of Kopro Beki (on the Duch ICH list). The Surinamese-Amsterdam women that have revived this way of gift-giving originating in slavery, were included in our exhibition Black Amsterdam.

As for the traditional craftsmanship: our conservators include (former) practitioners in the research around craft objects and document their creation and use. The Amsterdam Museum is represented on the board of the yearly Craft in Focus festival and is present during the festival.

The Amsterdam Museum is moving more and more towards a museum of the contemporary (without forgetting the past). Contemporary collecting also means documentation of practices around objects. For exhibitions we work with communities and individuals that are involved in processes of selection, documentation, presentation and collecting.

The Amsterdam Museum plays a role in discussions around ICH and the relation between material and immaterial heritage, especially in an urban context. We work with practitioners, also the ones that are not so aware of or keen on being part of an 'ICH community', for example graffiti writers, women wearing veils, football fans and hip-hop musicians. The museum takes a stand in respect to contested forms of ICH such as the Black Pete discussion, as we feel this discussion enables people to talk about the origins and changeability of social practices.

Description of the project / practice / program

Amsterdam has a rich musical tradition. One of the most famous neighborhoods in musical respect is the Jordaan area, a (former) craftsmen- and working class neighborhood, where in the 17th century many migrants settled. From the end of the 19th century onwards the genre of Jordaan songs developed, influenced by Italian opera, French musette and with Yiddish words in the lyrics. Singers like Johnny Jordaan and Zwarte Riek revived he genre in the 1950s/60s, at a time when many people moved out of the neighborhood due to renovation. Nostalgia for the old hood, even though the houses were slums, the joys and sorrows of life, money and problems with the police were subjects of the songs. A project in the Amsterdam Museum, planned for 2019, aims to shed new light on these Jordaan songs by juxtaposing them with another musical genre with foreign roots: hip-hop. Since the spread of hip-hop around the world, everywhere local versions in local languages have developed. Although different in rhythms and lyrics, the Jordaan songs share similar subject-matter with hip-hop. The exhibition will focus on two neighborhoods: the Jordaan and the Bijlmer, a high-rise area, that was built 50 years ago. It became home to many migrants, mainly from the former Dutch colonies in the Caribbean and African countries. Especially in the 1980s and 1990s it was considered to be the 'ghetto' of Amsterdam. Both areas share a sense of pride in the own neighborhood but have a negative image in the eye of outsiders.

Representing Mokum/Damsko aims to create bridges: musically, geographically, social and over time. (Mokum is the Yiddish world for Amsterdam/Damsko is street language rooted in Surinamese). We will present the songs of both genres in the context of the neighborhoods where they were created/performed: sound recordings and videos of performances and oral histories as well as the material culture connected with musical practice, such as the clothes of the musicians, instruments/computers to make beats, records and other 'carriers' of music. Next to the exhibition we will build a website, create an interactive music map of Amsterdam, and launch a program of performances and meetings.

The project will build on the network established in 2006 when we made an exhibition/book/event about the relation between Amsterdam and music (20st/21st century). As a result of that project important collections of archives, records, clothes and video recordings entered the collection of the Amsterdam Museum and the City Archives. 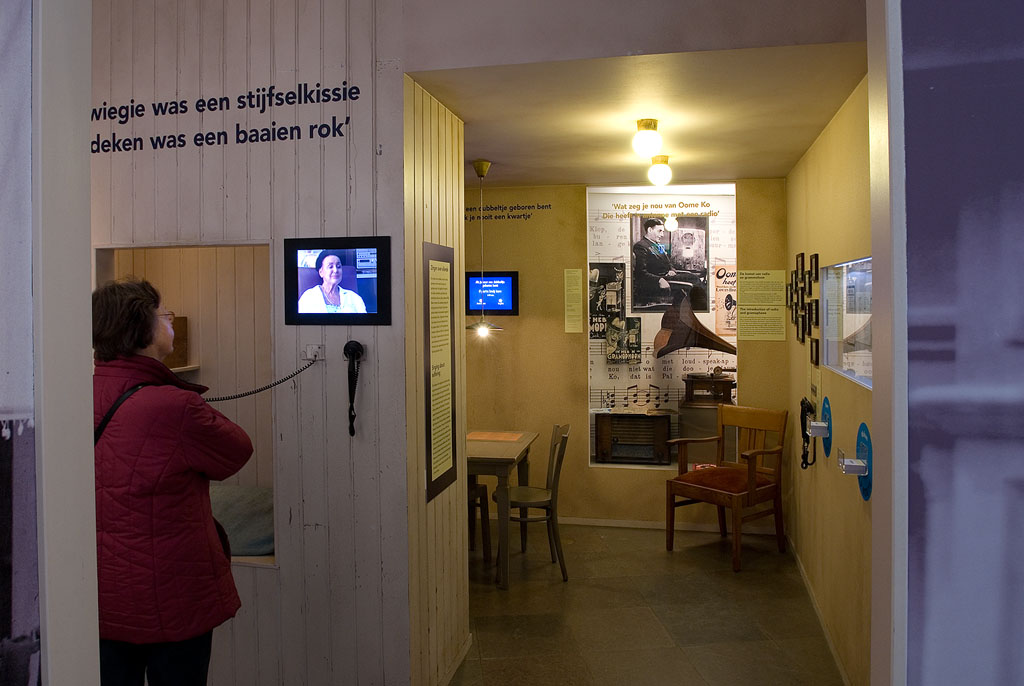 How were practitioners of intangible cultural heritage involved?

For the project Representing Mokum/Damsko the Amsterdam Museum works with groups and individuals that strive to keep their heritage alive; traditional choirs that sing the Jordaan repertoire with 'a sob in the throat', in costumes reminiscent of clothing around 1900 (such as Zwanenkoor and Smartlappenkoor); practitioners that sing in cafés and at festivals; artists that have modernized some of the songs from the 1950s/1960s and musicians that continue the musical tradition, such as accordionist Andre Vrolijk (who owns the instrument of famous accordion player Johnny Meijer) and singer Davey Bindervoet (who inherited the Edison ring of Johnny Jordaan).

An important collaboration is established with Top Notch, the leading Dutch independent hiphop label. In 2016 they released a series of CD's De Parels van de Jordaan (Pearls of the Jordaan). After rescuing unknown Surinamese music from oblivion in the Sranan Gowtu project, Top Notch is now making available for a new generation the music that was produced during the 1950s and 1960s in the Jordaan. Together we developed the plan to compare and contrast the Jordaan songs with present-day hip-hop. In interviews with many hip-hop musicians the importance of the neighborhood, biographical backgrounds to the tracks, comparison with older musical genres like Jordaan songs were discussed. Apart from contributing to the project, interviews raise awareness among the hip-hop musicians that their own musical history also can be considered as (im)material heritage.

The (im)material cultural heritage of Jordaan songs is (to some extent) safeguarded. Projects like Representing Mokum/Damsko and a previous music project of the Amsterdam Museum (2006) contributed to the safeguarding and re-use through new arrangements and sampling by hip-hop artists. Interest of a local museum can stimulate to the inclusion in (music)collections of new genres like hip-hop, in a sense 'the ICH of the future'. In the VS this 'heritagezation process' is already happening with the Hiphop Archive & Research Institute at Harvard University. Our contacts with both academia and practicing musicians will contribute to this process in the Netherlands. Together with students from academy InHolland we are developing a music map of the city, working together with various musicians in order to include their tracks in an interactive map of Amsterdam songs.

Co-creation and participation are effectuated though informal meetings and an advisory group. The museum is more than willing to share authority with the musicians. We will also include participatory elements aimed at social bridging in the exhibition, such as a karaoke that includes both genres.

CV of the author

Annemarie de Wildt is a historian and curator at the Amsterdam Museum. Her focus is on daily life, urban conflicts, culture and identity with exhibition subjects like prostitution, Amsterdam songs, sailors' tattoos, football as 'the new religion', neighborhood shops and graffiti. These exhibitions are characterized by a hybrid variety of objects, often a mix of 'high' and'low' culture and with a strong role for human stories. She prefers to co-create exhibitions in dialogue with the people that are (re)presented. Annemarie de Wildt is a keen blogger and has published books/catalogues and articles on the practice and dilemma's of curating and (contemporary) collecting.

It is no longer possible to subscribe to this bestpractice. Reports and videos will be published after the bestpractice.